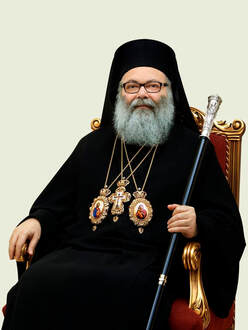 His Beatitude JOHN X, Patriarch of Antioch and All the East
His Beatitude John X was born in 1955 in the city of Lattakia, Syria. His father Mounah Yazigi was from Lattakia, a teacher of Arabic language. His mother Rosa Moussi was from Tripoli, Lebanon. They gave birth to four children – two boys and two girls. His Beatitude’s brother is His Grace Metropolitan Boulos, honorary Metropolitan of Diyarbakir. One sister is a nun. His Beatitude lived and studied in the city schools. He graduated from the University of Teshreen with a Bachelor of Civil Engineering. During his university studies, he played an active and leading role with the youth, which led to the establishment of a Byzantine Music School and many spiritual youth programs. His work led to a great spiritual revival among his generation.

In 1978, His Beatitude graduated from the St. John of Damascus Institute of Theology, University of Balamand, with a Bachelor in Theology. In 1983 he graduated from the University of Thessaloniki, Greece with a doctoral degree in Liturgia. He was awarded the Doctorate with distinction. The title of his doctoral thesis published in Greek is: "The Service of Holy Baptism: An Historical, Theological, and Liturgical Study." In 1981, and simultaneously with his doctoral studies, His Beatitude earned a Diploma in Byzantine Music from the Conservatory of Byzantine Music in Thessaloniki, Greece.

His Eminence Metropolitan John Mansour of Lattakia ordained John Yazigi a deacon in 1979 and a priest in 1983. As priest he served in the Archdiocese of Lattakia. Since 1981, he taught courses on Liturgics at the St. John of Damascus Institute of Theology at the University of Balamand. During the periods of 1988-1991 and 2001-2005 he served as Dean of the Institute of Theology. In addition, he served as Abbot of St. George Al Humayrah Patriarchal Monastery in Syria. There he founded a monastic community and a school of ecclesiastic studies. He also served as the Abbot of the Our Lady of Balamand Patriarchal Monastery in the years 2001-2005. His Beatitude is the spiritual father of the Convent of our Lady of Blemmana in Tartous, Syria.

In addition to his pastoral care in these parishes, he was involved in many worldwide activities at the ecumenical, Christian and especially Orthodox Christian spheres. He participated in many international conferences in Greece, Italy, Switzerland, Cyprus, United States of America, Russia, and the United Kingdom.

His Beatitude is distinguished by his ecclesiastic, national and ecumenical presence shown through his participation in many conferences, on the national and international levels. He is renowned for his clear vision, based on truth, and eagerness to find the best solutions for conflicts amongst parties. He is known by his compassionate and friendly character. He is a good listener, and a faithful steward for those in need.

Wherever he worked, His Beatitude proved to be a man of action and a good sower of the Word of God, seeking to reveal the beauty of the Spouse of Christ and making Her shiny and strong. He is known by his closeness to the Youth and his ability to involve them in the service of the church, their society and their nation. He is a good administrator, and a proven man who knows how to work with others and reinforce institutions. He played a leading role in Higher Education while he was Dean of the St. John of Damascus Institute of Theology. 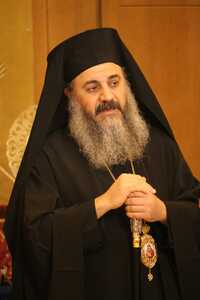 His Eminence, ANTONIOS, Metropolitan of Zahle, Ba'albek and Dependencies, Patriarchal Vicar
Antoine el-Souri was born in Mina, Tripoli on June 20, 1970. He studied at the National Orthodox School Mar Elias in Mina.

In 1994, he graduated from the Faculty of Engineering of the Lebanese University, receiving a degree in electrical and electronic engineering.

He studied theology by correspondence with the Institut Saint-Serge in Paris through the Diocese of Mount Lebanon. He graduated from this institute in 2006 with honors. He worked at various jobs before entering the priesthood. On June 24, 2001, he was ordained subdeacon at the church of the Monastery of Saint John the Baptist in Douma by His Eminence Metropolitan Georges Khodr.

On March 20, 2005, he was ordained deacon at the Cathedral of Saint George in Mina by Metropolitan Elias Kurban of thrice-blessed memory.

On July 24, 2005 he was ordained to the priesthood in the parish of Mina. He was priest for the youth in the Diocese of Tripoli and Koura.

On September 7, 2008 he was elevated to the rank of archimandrite during the service of vespers for the Feast of the Nativity of the Theotokos at the church of the metropolitan's residence.

A member of the Youth Movement from childhood, he was active in the group under the guidance of Costi Bendaly. He held various positions in the Orthodox Youth Movement, including:
2001-2003: Assistant General Secretary to Raymond Rizk.
2001-2003: Responsible for mentoring programs in the general secretariat.
2002-2004: Head of the Mina branch.
2004-2008: Head of the Tripoli center.

He was vice president of Syndesmos, the international league of Orthodox youth movements. He participated in several local and regional conferences. He was active in the choir of Mina and was trained by the Protopsaltis of the See of Antioch, Dimitri Coutya.

On June 19, 2011 he became abbot of the Monastery of Our Lady of Bkaftine. Since that time, he has conducted significant renovations of its buildings. He prepared a small church dedicated to Saints Anthony the Great, Arsenius the Cappadocian, and Nectarius the Wonder-Worker. About two months ago, he restored the Church of the Dormition of the Theotokos in the monastery.

On June 16, 2012, he received the angelic great schema, taking as his patron the Prophet Jonah, during the divine liturgy celebrated by His Eminence Metropolitan Ephrem Kyriakos.

He collaborated with the publishing house Ta'awwuniyyat el-Nour to publish a documentary entitled "The Monastery of Our Lady of Bkaftine: Holiness and Ancient Roots" about the history of the monastery from its foundation to today and its pastoral and cultural role in the region of Koura.

He is the author of several articles in Majallat el-Nour, including "Youth and Life", "Between Proselytism and Evangelism", "Meditations on Monasticism", "World Orthodox Youth Day", "The Issues of Homosexuals in the Priesthood". He is the author of theological articles and studies in al-Karma, the bulletin of the Diocese of Tripoli and Koura.

He has taught various subjects, including Old Testament and the Epistles of the Apostle Paul at the department of theological preparation at the Pastoral Center for Orthodox Patristic Heritage in the Diocese of Tripoli.

On October 7, 2015, he was elected by the Holy Synod of Antioch as successor to Metropolitan Spiridon Khoury as metropolitan of the Diocese of Zahleh, Baalbek and Their Dependencies.

On October 24, 2022, Met. Antonios was appointed as Patriarchal Vicar for the Archdiocese of New York and All North America by His Beatitude Pat. John X, following the retirement of His Eminence Met. Joseph. 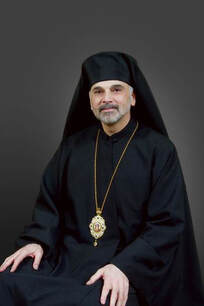 His Grace, ALEXANDER, Bishop of Ottawa, Eastern Canada, and Upstate New York
His Grace Bishop Alexander was consecrated to the Holy Episcopacy on December 5, 2004 at the Patriarchal Cathedral in Damascus, Syria​. His consecrating bishops included His Beatitude Ignatius IV. He was enthroned as the first Diocesan Bishop of Ottawa, Eastern Canada, and Upstate New York at St. Elias Cathedral in Ottawa on June 12, 2005.
Bishop Alexander served as priest of St. Mary's Antiochian Orthodox Church in Hunt Valley, Maryland from 2000-2004.
Bishop Alexander was born into an Orthodox Christian family in north Lebanon in 1956. He attended Tripoli Boys' School and after passing the Lebanese Baccalaureates I and II, he enrolled in the American University in Beirut. Due to fighting in Lebanon, he was unable to continue his education there and instead moved to the U.S. to attend the University of North Texas. He graduated with a B.A. in 1978 and an MBA in 1980. He returned to Lebanon, where he worked from 1981 to 1985 for a company that imported raw materials for factories.
In October 1985, he returned to the U.S. and found work as a supply manager at Prince George's Hospital in the Washington, D.C. area. After eight years in that job, he worked for a local company that exported medical supplies to the Middle East and then in 1995 was hired by Federated Stores to work as a sales associate for Bloomingdale's in Rockville, Maryland. While there, he wrote to Metropolitan Philip requesting his blessing to enter seminary. He was directed to attend St. Vladimir's Theological Seminary in Crestwood, New York, from which he graduated in 2000.
Bishop Alexander was ordained to the Diaconate on January 9, 2000 and to the priesthood on April 9, 2000. He was elevated to the Archimandrite on July 4, 2004. On December 5, 2004, he was consecrated to the episcopacy by Patriarch Ignatius IV (Hazim) of Antioch in Damascus, Syria, and he has served as the Bishop of Ottawa, Eastern Canada, and Upstate New York since that time.
Bishop Alexander's namesday is August 30 (St. Alexander, Archbishop of Constantinople).​