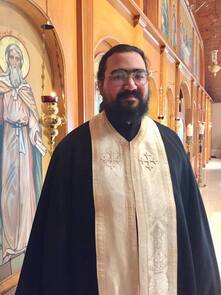 Rev. George Goodge, Pastor
Fr. George was born in Allentown, PA and was raised in the Orthodox Faith. He graduated from Temple University in Philadelphia, PA in 2014, with a B.A. in Philosophy and Ancient Mediterranean Studies. After college he studied at St. Tikhon's Orthodox Theological Seminary in South Canaan, PA, where he earned his M.Div. with Honors in 2017. He married Khouriyeh Mara in August 2018, was ordained to the Diaconate in May 2019, and the Priesthood in July 2019. On August 1, 2019, Fr. George was assigned pastor of St. George's. 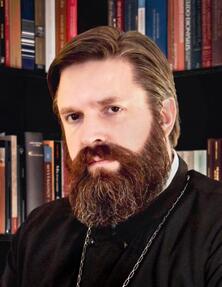 Rev. Demetrios Harper, Ph.D.​
With a bachelor's degree in literary theory, a master's in theology, an interdisciplinary doctorate in theology/philosophy/religious studies, Fr. Demetrios moved beyond his academic training to be ordained in Novo-Diveevo in 2008. He served in Greece from then until 2018, when he continued his academic work as a Post-Doctoral Research Fellow at the University of Notre Dame. From 2019 to 2022 Fr. Demetrios held the position of Assistant Professor of Church History and Moral Theology at Holy Trinity Seminary in Jordanville, NY. In August 2020 he was officially received into the Antiochian Archdiocese from the Church of Greece . In July 2022, Fr. Demetrios took a position as Associate Professor of Dogmatic Theology at St. Tikhon's Orthodox Theological Seminary in South Canaan, PA. He remains attached at St. George's, while also serving as a supply priest for the Diocese of Ottawa, Eastern Canada, and Upstate New York, and as a Chaplain for the US Navy Reserves.